DeVon and I met in June of 2008. I was at Fort Jackson, SC attending Recruting School for my job as a (Civilian) US Army Recruiter. We were seated alphabetically and therefore Freeman was seated next to Hunter. The classroom was really warm bc the ac wasn’t working so the soliders were allowed to remove their ACU jackets. DeVon removed his and I immediately noticed all his tattoos. We were given an assignment of doing a powerppoint and I had mine done in a day. DeVon asked me about helping him to do his. I invited him to my hotel room to work on it that evening. After the powerpoint was completed he stated he needed to repay me for my help and asked me to dinner. After that we became inseperable. He and I officially started dating June 29, 2008. Recruiting school ened in July and I returned to Houston and DeVon returned to Ft Carson, Colorado. The day he left he called after he drove off and told me that he loved me. October 2008 he made his 1st trip to Houston. I introduced him to Aliya and she was in love, he adopted Aliya in his heart as his own daughter. November 2008 we found out that we were pregnant. Another visit was made in Dec and I went to CO in March. He made another trip down in April before he deployed to Afganistan in May. Ariana DeVon Hunter was born June 9, 2009. Together we have 3 girls: Aliya 6, Angel 4, and Ariana soon to be 2. In July 2009 DeVon and I broke up and stayed separated until Jan 20, 2011. Many people say that an ex is an ex for a reason. Heck even I believed it. But this was different I could tell by the things that he said that he had changed. Feb 2011 I packed my car and my girls and we moved to Ft Benning, GA. “God bless the broken road that lead me straight to you”. I heard alot of things from alot of people about whether or not we should have gotten back together and how I was crazy for moving after only being back together a couple of weeks. But how can you say no to something that you prayed for for 18 mos. I prayed that if it was His will DeVon and I would get back together, so why would I not move? I dated other people during the 18 mos we were apart and it never seemed “right”, he dated someone else and he felt they were “never really more than friends”. Before I believe that DeVon wasn’t as ready as he “wanted to be” for the committment of a relationship and I am grateful for the 18 mos apart that allowed him to grow, allowed us both to grow, and now we are where we both need to be. We are by no means perfect but we are each other’s other half. …… and I thank God for that everyday.
Articia 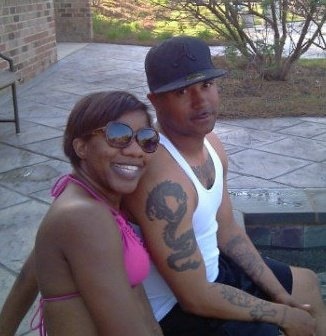 Like Loading...
This entry was posted on Friday, June 3rd, 2011 at 8:13 pm and posted in Lovers Showcase. You can follow any responses to this entry through the RSS 2.0 feed.
« Introduction to the Lover’s Showcase
When love is right in front of you »